TWE is more intimate to drive by battery than XBee.

XBee peak consumption current is more than 100 mA, therefore tough to drive by battery. How is another wireless module TWE? I measued it by my peak current detector. This article has been uploaded at the top page.

Photo4 On universal board 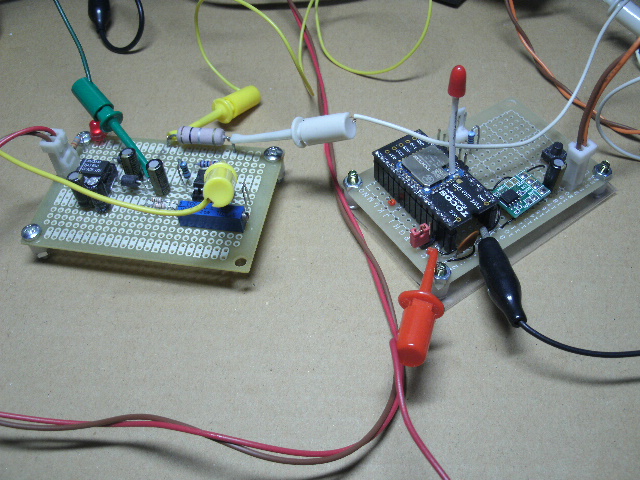 I wired and soldered TWE-Lite and I2C temperature sensor module of ADT7410 on the universal board of ICB-88G shown in Photo4. I wanted to know the actual peak current consumption of TWE to estimate battery life. I had made a peak current detector to measure a wireless temperature sensor with XBee before. I used it as before. The photo5 shows the measurement of the peak current.

Varying 2.2 to 3.3V to supply power voltage, The peak current is about 17mA at peak, including constant consumption current 0.22mA. I measured it at 2.8V by PC510. The maximum deviation of PC510 and TWE was 11mV. How does it dissipate consumption current, if monostick fail to power down? I confirmed 4.2mA height and 6ms width pulse at the same period in a few minutes. DSO was CH1 50mV/div and 10ms/div.

In case of XBee, the peak current is about 10mA with successive sharp pulses. the number of the pulses is the same of packet number. The base current is also successive pulses with 40us period.